The first lockdown came too late to really affect my teaching. I had a few ad hoc online seminars with smaller groups of students, but mostly I had time to think and prepare for September. Whilst this was a bit of a risk, there was always the chance that the viral situation was over by then and we were back to face-to-face teaching on campus, I knew that I also had a summer of research seminars, virtual conferences, and a new online-only degree programme was launching that I’d spent the last couple of years putting together. So, for my circumstances, it made sense to invest in a bit of kit that would enable me to produce reasonably polished, reliable, and professional video and audio for webcasts and podcasts whilst also producing a good live audio and video feed where I had easy control of things like bit-rate, audio levels and muting, synchronisation, etc.

So I spent a fair bit of time during the first summer of lockdown basically looking at how folk were doing flipped classrooms and pre-recording their materials. It seemed that whilst the content of lectures is obviously of prime importance, and that can involve some adjustment to the way that things are delivered when presenting materials virtually, production values are also very important. Interestingly though, I realised that, in terms of value for money when getting equipment, it was live streamers and pod-casters who seemed to be the best source of information for what I was looking for: good reliable equipment that I could operate single-handedly and on the fly whilst lecturing.

I also realised that I wanted to optimise my equipment for live lecturing/streaming/meetings rather than merely pre-recording lectures. This is mainly because my lectures aren’t about delivering the necessary information to my students, instead I encourage questions and discussion. I suppose that I already take a form of “flipped classroom” approach in that I ensure that materials are available for study before a timetabled event, usually all materials for the entire trimester are available from week one, so that students can attend my lectures already knowing, to some degree, what I will cover. This way, the lecture becomes their second exposure to the material (part of that whole repetition and practise is the key to learning approach) and we can then use the time to focus on the sticking points, those aspects of the material that the students themselves find difficult or problematic. NB. Now, after a couple of trimesters of teaching online I also have recordings of my lectures that supplement my written materials. I still lean towards the written documentation as the canonical source for efficient and deep learning, with video playing a supplementary role. For example, I will often watch videos of others playing synths ,especially to get good ideas for interesting and innovative patches, but the prime places for learning are the synth’s documentation and manual, then deliberate and focussed practise.

I’ll admit that I also used this period during the 2020 summer as an opportunity to distract myself and probably spent more money than was sensible, but I at least now have a flexible and future-proof setup that can be reused in a range of audio-visual production, recording, and streaming contexts.

Note that I set out initially just to get a good quality webcam but they weren’t readily available at the time because everyone, their dog, and their grandma were buying them during that first lockdown. Good webcams cost a significant fraction of the cost of a traditional digital camera or video camera so, at the time it seemed sensible to avoid a webcam and buy a proper cam (although that doesn’t explain how I ended up with three video cameras).

At the time I also wanted to re-use equipment that I already had (usb microphones and condenser mics with Analogue to usb conversion boxes). This lead me through a few adventures. For example, until this point I hadn’t realised that HDMI video inputs, such as through an Elgato Cam Link, together with a USB Mic audio input can end up with audio-visual syncronisation issues. I spent a fair amount of time in OBS and made a clapperboard to get a clear signal for AV sync offsets. However, whilst this was good enough for recorded materials, it wasn’t sufficient to my mind for live broadcast in Zoom or Skype. I wanted a good reliable always in-sync AV stream. At this point I found that my old mac-mini was struggling so the first investment was an M1 mac mini. This has more than enough grunt for pretty much anything that I care to throw at it.

Here’s an overview of the gear that I use for online teaching:

To facillitate getting all of this onto one desk I mounted my screens onto Ergotron LX adjustable arms. This means that the space where a stand would be, below the display, is now available for a line of boxes. My boxes are arranged generally in order of the AV stream. From the RodeCaster Pro on the left, through the ATEM mini, then Web Caster and finally into my computer.

Connections for the whole setup are illustrated below. I’ve differentiated connection types using colour and arrow directions show the direction of signal paths between devices. 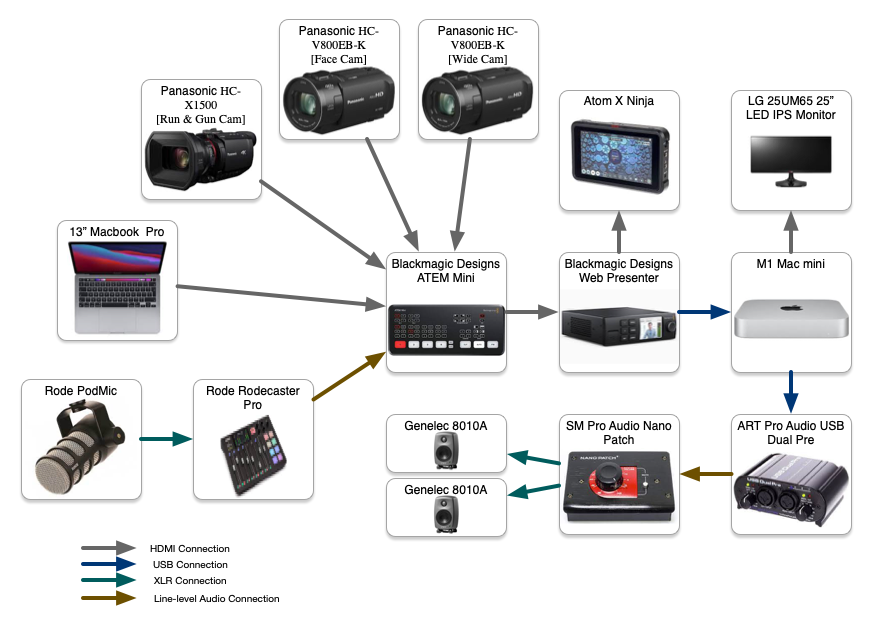